I have received information from a few people that have changed my mind on some of my original points. I really don’t consider myself a conspiracy theorist, I just want to correct an injustice and set the record straight.

PLEASE NOTE
I am not a journalist. I have simply gathered some observations that looked odd to me, and some of them have been refuted. Please read all of the article and the comments and then weigh up the evidence before you decide.

During the protests in London today the police stated that they had started “containing” the crowds after they violently attacked a police van.  I contend that the van was deliberately planted in order to provide an excuse.

At around 12:30 I started watching BBC News which as showing live footage of the protests from a helicopter. The police were already blocking the route of the planned march with a huge amount of vehicles and offices. I watched that van be driven through the crowd from behind, angering all the people that had to jump out of the way. It was quickly surrounded by furious protesters and forced to stop. A little later, a few (unknown) people started to attack the van, trying to break the windows, roll the van over and paint graffiti on it. Some brave kids tried to stop the attacks, but were eventually pushed aside.

The moment it started:

And some more brave people: 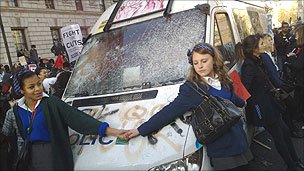 But there is something really interesting about this van.

Jump to 28 seconds in to this video to see what I mean. Look just under the windows.

And thanks to @psweetman for spotting this. Does that say “police aware” ?

Draw your own conclusions from that.

Despite all this, the protests were mostly peaceful.
http://www.guardian.co.uk/education/2010/nov/24/student-protest-largely-peaceful

In response to Rob W, here is the ITN video. There is a number plate visible at 6 seconds in, although not clear enough to identify a number.

This picture shows “POLICE AWARE” sticker is aged and has been there a while. (Thanks to Harry Watko for these.) 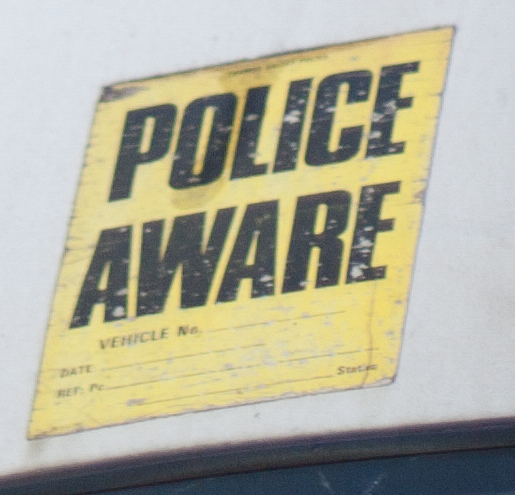