Hundreds of cyclists were arrested on Friday night after trying to take part in a Critical Mass event. Critical Mass takes place every month and has been going for eighteen years however on this occasion police clamped down heavily to prevent the cyclists from taking the intended route and the evening ended in serious violence and mass arrest.

In the first few seconds of this video British Transport Police Officer 4125 is shown grappling with a man in a Shopmobility scooter, and then aiming something at him. (Probably CS spray.) The man shouts several times “I am disabled” but is ignored. A police medic can be seen trying to wrestle him away and prevent him from using it. Further in at 1:06 he can be seen and heard striking someone with a baton.

The person who uploaded the video has written this account:

27th July 2012 19:30pm In the early stages of the Monthly Critical mass Bike ride a British Transport Police Officer PepperSprayed a Disabled Man in a shoprider who had been apparently hit by a car along with several others. During the melee as the officer is pulling out the pepper spray , A fellow Female police medic attempts to stop the action, but is struck back and the officer sprays the Disabled man and most of us in the crowd, not satisfied, he then whips out his telescopic truncheon and trys to apply a wrist lock / neck Lock on the Disabled man using the truncheon. Eventually a real Police officer arrives with 3 vans and about 50 Backups. The disabled man is arrested and the British Transport Cop is led away by some other officers. 27th July 2012.

From earlier in the evening:

Here is the event shown in the video above from a different angle.

Bail conditions imposed on those arrested: 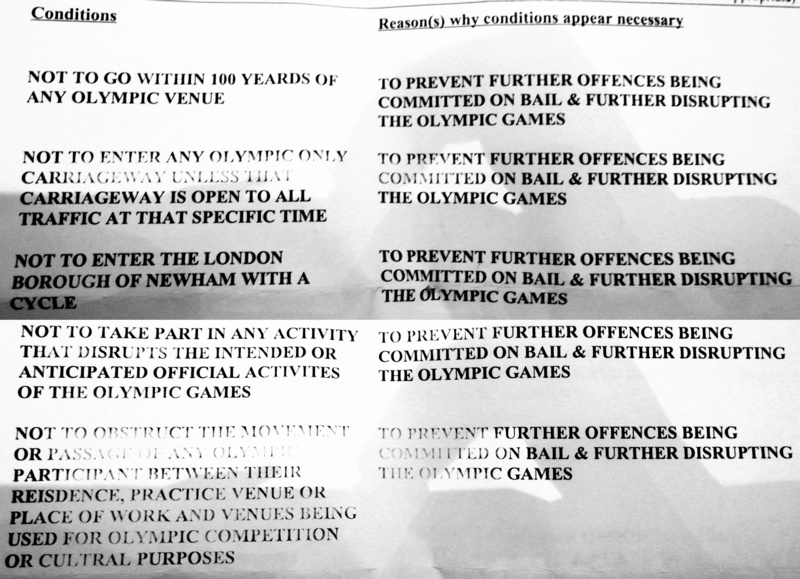