I read in The Guardian today that Prospect Magazine (Subscribers only) had interviewed Sir Hugh Orde, president of the Association of Chief Police Officers. I remind you that the ACPO is a private for-profit company that seems to have a say in the way that we are policed, without being subject to the Freedom of Information Act or any democratic oversight. The interview was very revealing about police perception of social media as a method of organising protests and about their attitude to protesters’ rights. 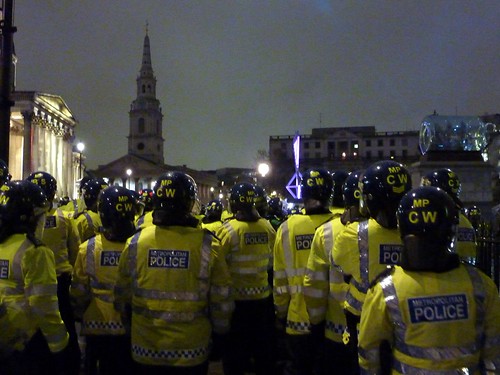 Orde is of the opinion that “hyper kettling” (containment followed up by crushing the crowd) is acceptable even though it infringes on human rights. “I can understand the need for it, [It is done] for the greater good, and that’s the really complex part of policing.” On charging at protesters with horses, he commented that it is a “very useful, effective tactic.” Kettling is currently working its way through the court system after various victims of it launched legal challenges on human rights grounds.

Orde also equated protesting on private property with theft, demonstrating an amazing ability to confuse things in his head. Perhaps he is the one telling people that photography in public places is illegal too?

“Walking into Topshop with an intent to cause damage, [means] you’re actually a burglar. If you walk into Boots and do nothing then you are simply a trespasser and the role of the police is to stand by to prevent a breach of the peace.”

His statement implies that UK Uncut protesters intend to cause damage. As a senior policeman he will probably get away with such ludicrous defamation. I believe that he is wrong about the trespassing too. As shops are normally open to the public, it is my understanding that any member of the public is free to enter until such time as a representative of the shop asks that person to leave. It is trespassing if protesters have been asked to leave and refuse, but it is shocking that a high-ranking police officer does not understand the difference.

Where Orde’s understanding fails completely is on the nature of the current anti-cuts protests.

“It is not good enough to throw our hands up in the air and say ‘Oh, we can’t negotiate because there is no one to negotiate with. There are lots of people we can talk to, but they need to stand up and lead their people too. If they don’t, we must be clear that the people who wish to demonstrate won’t engage, communicate or share what they intend to do with us, and so our policing tactics will have to be different … slightly more extreme.”

This idiot has no right to tell any of the protesters that it is “not good enough” to have no leader. These people are not docile little sheep, and they don’t have to follow anyone to object to the government conducting a slash-and-burn campaign on our benefits and our public services. They do not have to follow a leader just because some policeman is out of his depth in dealing with the internet. If the police want to engage with protesters then they can easily talk to them through twitter and facebook. If protests can be organised through a consensus via social networks then there is no conceivable reason why the police can’t have their say on the same social networks. When I was talking to a friend about this interview earlier she said something which I think sums up nicely what the protesters think about the situation.

Anonymoosh said “The police find a way to engage , when they want to, this time they don’t, they want people to be too scared to demo. They only want to know what we are doing , so that they can plan to stop it, they don’t want to engage. They know full well when the meetings are, we arrange them on the net. The truth is , as a movement, we have no need of leaders, it’s the police that need us to, I don’t see why we should oblige.”

Does Orde really think that people are refusing to engage, or does he prefer to have a nice ready-made excuse to kettle the little people?